Mellencamps music is for the masses, the unsung heroes in everyday life, the regular folk.

After releasing a few albums, he broke out in 1979 with his first hit, “I Need A Lover” In 1982 his fifth album American Fool was the year’s best-selling album on the strength of two huge hits, “Hurts So Good,” and the number 1 single “Jack & Diane,”   The albums that followed in the 80’s, Uh-Huh, Scarecrow, Lonesome Jubilee, and Big Daddy, were released under the name John Cougar Mellencamp. Hit singles during this period included “Crumblin Down,” “The Authority Song,” “Small Town,” “Rain On The Scarecrow,” “Lonely Ol Night,” “”R.O.C.K. In The U.S.A.,” “Paper In Fire,” “Check It Out,” “Cherry Bomb,” “Pop Singer,” and “Jackie Brown.” So far in his career he has over 30 hits world with and 3 top 5 singles in the US alone.

Mellencamp is Grammy winner for best male pop vocal with “Hurts so Good”, and Rock n Roll Hall of famer, inducted in 2008 by his good friend Billy Joel. He is a true working class superstar!

And now John “Cougar” Mellencamp’s hit music comes to you, faithfully recreated but the mighty vocal talent of Tim Carter Roser and his brilliant band, so close to the original you’d swear you were at the a real John Mellencamp show. 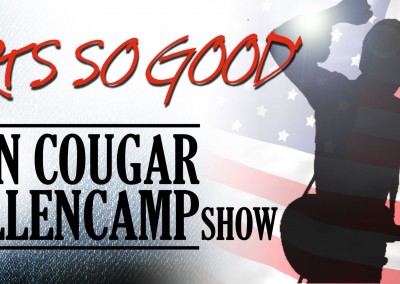