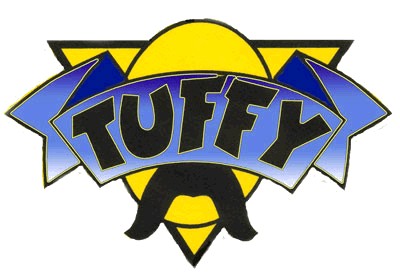 It’s hard to figure out how, after 20 years of playing in pubs throughout Australia and overseas, Tuffy’s act still works so well today. After all, there’s nothing much to it: just one bloke singing and playing a guitar with a 20 year old drum machine for backing. But work well it certainly does, he is still pulling huge crowds. Take The Normanby Hotel on Sundays for example, it has become the biggest pub gig Brisbane has ever seen.

Maybe the clue lies in the act’s simplicity. Because the songs are so stripped down, it gives an opportunity for the audience to get involved and become part of the performance. Sometimes

the crowd can even drown Tuffy out because they’re singing so loud!

Maybe its because it is just one bloke, there is no technology or anyone else to hide behind, he must make it work, or maybe it’s because he just loves to party and loves to see everybody else doing the same. If the truth be known it’s probably all of the above and the fact that history does have a habit of repeating itself.

Of the gigs Tuffy has played at over the years, some have represented an era in peoples lives. Some may remember The Underground days or The Mayfair Crest with a skinny young guitarist called Keith Urban playing by his side. Then there was City Rowers, Billys Beach House and the original Fishermans Wharf all legendary gigs and who could forget the Trans on Saturday nights in the mid 90’s, then of course there was 10 years of partying at Fridays Mooloolaba.

There has been gigs on tropical Fijian islands, a performance on the first Compass 2 flight to Cairns (remember them?) the entertainment for Shane and Simone Warne’s wedding and many corporate gigs for companies such as Toyota, Merecedes Benz and McDonalds.

Every performance has had its own uniqueness, no two gigs have or ever will be the same. For some people a single night will be etched in their minds for whatever reason…a song is like photogragh, it can bring back the best memories.

Tuffy is quite simply…The ultimate one man show!
Tuffy’s secret to entertainming a crowd is in his own words,”not rocket-science”
He plays songs everyone knows, appeals to a large demographic. people from 18 -55, uni students to corporates.
Tuffy offers the ability to adapt to any room or crowd and no two shows are the same, every show is in the moment, “what is the best song for now, not what’s next on the list!”

The below is just a sample:
FIVE HUNDRED MILES
20 GOOD REASONS
3AM
ABOUT A GIRL
ACCINDENTALLY KELLY ST
ADD IT UP
AINT NO MOUNTAIN
ALL FOR YOU
ALL THE SMALL THINGS
AMERICAN PIE
AND SHE WAS
ANOTHER SATURDAY NIGHT
APRIL SUN IN CUBA
BABY I NEED YOUR LOVING
BAD MOON RISING
BEAUTIFUL DAY
BETTER BE HOME SOON
BETTER MAN
BILLY DON’T BE A HERO
BLAME IT ON THE BOOGIE
BLIND MELON
BLISTER
BLUE SUEDE SHOES
BOYS LIGHT UP
BREAK MY STRIDE
BREAKFAST AT TIFFANYS
BREAKING UP IS HARD TO DO
BRIGHT SIDE OF THE ROAD
BRIMFUL OF ASHA
BROWN EYE GIRL
BUILD ME UP BUTTERCUP
BY THE RIVERS OF BABYLON
CALIFORNIA DREAMING
CAN’T ALWAYS GET WHAT YOU WANT
CAN’T HELP FALLING IN LOVE WITH YOU
CAN’T HURRY LOVE
CATS IN THE CRADLE
CECELIA
CELEBRATION
CHAPEL OF LOVE
CHEAP WINE
CHERRY BOMB
CHERRY CHERRY
COPACABANA
COPPERHEAD ROAD
COUNTRY BOY
CRACKLING ROSE
CRUEL TO BE KIND
CRUNCH GRANOLA
DANCING IN THE STREETS
DARK SIDE
DAYDREAM BELIEVER
DAYO
DELTA DAWN
DIRTY OLD TOWN
DIZZY
DOCK OF THE BAY
DOMINO
DON’T LOOK BACK IN ANGER
DON’T STOP THINKING ABOUT TOMORROW
DOO WA DIDDY
DOWN ON THE CORNER
DREADLOCK HOLIDAY
DRIFT AWAY
DUELLING BANJOES
DUMB THINGS
EAGLE ROCK
EVER SEEN THE RAIN
EVERY MORNING
FAITH
FATHER AND SON
FLAKE
FLAME TREES
FOLLOW ME
FREEFALLING
GET A JOB
GIRL YOU’L BE A WOMAN SOON
GIVE IT UP
GIVE ME ONE REASON
GLORIA
GOT MY MIND SET ON YOU
GREAT BALLS OF FIRE
HANDLE WITH CARE
HAPPY BIRTHDAY HELEN
HEART OF GOLD
HEY JUDE
HEY LEONARDO
HIGHER
HIT ROAD JACK
HOLY GRAIL
HOOKED ON A FEELING
HORSES
HOT HOT HOT
HOTEL CALIFORNIA
HOUSE OF THE RISING SUN
HURT SO GOOD
I CAN SEE CLEARLY
I CAN’T GET ENOUGH OF YOUR BABY
I GOT YOU
I WANNA DANCE WITH SOMEBODY
I’M A BELIEVER
IS SHE REALLY GOING OUT WITH HIM
IS THIS LOVE
JACK AND DIANNE
JACKIE WILSON SAID
JESSIES GIRL
KARMA CHAMELION
KHE SAN
KING OF THE ROAD
KNOCKING ON HEAVENS DOOR
KRYPTONITE
LA BAMBA
LAID
LAND DOWNUNDER
LAST KISS
LAYLA
LEAN ON ME
LEARN TO FLY
LIFE IS A HIGHWAY
LIGHTNING CRASHES
LIVING DOLL
LIVING NEXT DOOR TO ALICE
LOVE A RAINY NIGHT
LOVE HER MADLY
LOVER LOVER
LOVING FEELING
LUMP
MAMA MIA
MARGARITAVILLE
ME AND JULIO
MEAN TO ME
MOONDANCE
MOST PEOPLE
MR BIG
MR BRIGHT SIDE
MR JONES
MRS ROBINSON
MUSTANG SALLY
MY GIRL
MY HAPPINESS
NO WOMAN
OH I LOVE YOU SO
OH WOTTA NIGHT
ON THE ROAD AGAIN
ONE HEADLIGHT
ONE LOVE
ONE SUMMER
ONLY 19
OTHERSIDE
OVER MY HEAD
PERFECT
PIANO MAN
PICTURES
PLACE YOUR HANDS
PRETY WOMAN
PRIDE IN THE NAME OF LOVE
PSYCHO KILLER
REAL WORLD
RED RED WINE
RETURN TO SENDER
RING OF FIRE
ROADHOUSE BLUES
ROCKIN ALL OVER THE WORLD
RUN TO PARADISE
RUNAROUND SUE
RUSH
SANTA MONICA
SATISFACTION
SAVE TONIGHT
SAW HER STANDING THERE
SELF ESTEEM
SELLING THE DRAMA
SEXUAL HEALING
SEXY THING
SHIMMER
SHOOK ME ALL NIGHT LONG
SHOULD I STAY OR SHOULD I GO
SHOUT
SLIDE
SOMETHING GOOD
SON OF A PREACHER
SONG 2
SONGBIRD
STAND BY ME
STAYING ALIVE
STEAL MY KISSES
STIR IT UP
STUCK IN THE MIDDLE
SUMMER HOLIDAY
SUMMER SIXTY NINE
SUSPICIOUS MINDS
SWEAT
SWEET CAROLINE
SWEET CHILD OF MINE
SWEET HOME ALABAMA
SWING LOW SWEET CHARIOT
TAKE IT EASY
THAT’S ROCK AND ROLL
THE GAMBLER
THE JOKER
THE STROKES
THE TIDE IS HIGH
THROW YOUR ARMS
TIP OF MY TONGUE
TO HER DOOR
TOOK THE WORDS OUT OF MY MOUTH
TOWING THE LINE
TUCKERS DAUGHTER
TWIST AGAIN
TWIST AND SHOUT
UNDER THE BOARDWALK
UNDER THE BRIDGE
UPTOWN GIRL
US FORCES
WALK DON’T RUN
WALK IN THE ROOM
WALKING ON SUNSHINE
WHAT I LIKE ABOUT YOU
WHAT’S MY SCENE
WHATS UP
WHEN I COME AROUND
WHEN MY BABY GOES TO RIO
WHEN YOU WERE YOUNG
WILD THING
WISH YOU WELL
WISH YOU WERE HERE
WONDERWALL
WONT BACK DOWN
YOU GOT IT
YOU MAKE ME FEEL LIKE DANCING
YOU’RE THE VOICE
YOUR JUST TO GOOD TO BE TRUE